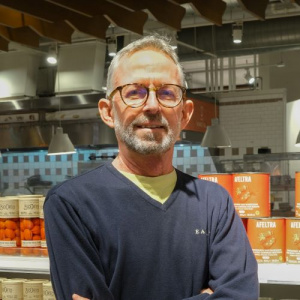 Since 2015, Scott has been a valued member of the Grocery Team at Eataly Chicago. Prior to Eataly, for 30 years, Scott worked for a multi-national transportation company managing domestic ground operations.  After Scott retired and moved to Chicago, his love of food and keeping active brought him to Eataly.

Throughout the years, Scott has been instrumental to the success of the Grocery Department, training new team members and helping the store meet sales goals. Scott is known for his positivity, passion, and extensive product knowledge. If you want to learn about dry pasta, Scott is the guy! Guests know Scott by name, and he’s also the go-to person for team members looking for advice on anything and everything related to artisanal dry pasta.

How did your passion for food begin?
“I’m from Minneapolis. When I graduated high school, I decided I was going to be a rock’n’roll star, so I moved to Los Angeles. After a year and a half, I had no money and was too humiliated to tell my father, so I enlisted in the United States Air Force. I was stationed in Adana in Southern Turkey. I got to experience fresh seafood and meat markets. The fish were so fresh they were still flopping on ice in the barrels. There were goat heads hanging from hooks still dripping blood. At first, I think I was a little repulsed by the amount of freshness – the smells, the sights. Then, I began to realize I had been missing out on a whole lot of food stuff that happened in the world. It really increased my passion to learn more.”

Do you have a favorite memory from your time at Eataly so far?
“I think my favorite time at Eataly was during the pandemic. It sounds really odd, but the way the North American management team easily handled the whole situation held me in awe. Of course, we all got furloughed except for the department heads, so we went from 400 employees to 20 in the store. When I came back from furlough, we could still operate even though the whole profile of Eataly Chicago had changed drastically. There were no restaurants open. People shopped for groceries, but it really was nothing like it was before. The professionalism from management that I experienced during the pandemic and being able to watch everybody expand their horizons and do all the different functions in the store – that’s a special memory to me.” 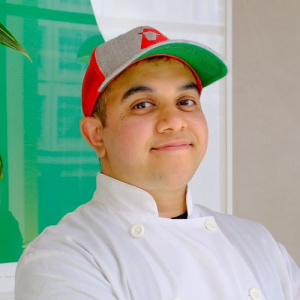